The History curriculum is centred on the belief that understanding why and how past events have shaped Britain and the world, is imperative for everyone.

Key Stage 3 is delivered in chronological order studying the causes, and significance, of events that have shaped our free and democratic country. Additionally, we aim for students to have an understanding of the causes of existing global issues, like inequality in society and international relations. We take great pride in resourcing and preparing for lessons so students enjoy their learning, whilst being stretched and challenged in a happy and memorable environment. We use modern teaching techniques, media, technology, energy and a lot of passion to help us do this.

Our Key Stage 4 curriculum covers a wide range of social, cultural, political, economic and religious topics that all have contemporary relevance. As students’ progress, we aim to develop their skills as historians too. This includes their conceptual awareness, working with evidence and debating historical interpretations. We are proud to be engaging students with challenging questions, making analytical links and building the self-confidence required to express their own opinions.

Key Stage 5 continues to develop their conceptual awareness and subject knowledge, as well as encouraging students to confidently engage in sophisticated historical debates in preparation for university.

At Key Stage 3 History is designed to give students a clear chronological understanding of why they live in the Britain and World they do today. We assess key turning points along the way, from the Battle of Hastings to the Second World War.

All schemes of work consist of differentiated and challenging lessons that link coherently, giving students historical knowledge as well as developing their conceptual awareness. Lessons are both engaging and fun, whilst challenging students of all abilities academically. History is today, more than ever, relevant to our young people. We hope they will learn to appreciate how far we have come as a society, and how far we still have to travel.

In Year 7 we cover the following:

In Year 8 we cover the following: 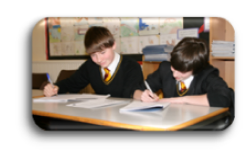 Students who choose to study History at Key Stage 4 will follow the AQA GCSE History course.

The areas covered in the course include:

The types of tasks that are completed are:

The course is assessed through:

There are two, 2 hour examinations worth 50% each of the final grade:

History is a well-established subject which colleges and employers both recognise as challenging and valuable. It develops many useful skills including the ability to interpret information, to evaluate information in order to establish if it is useful or reliable, to use information to reach a judgement and to be able to explain and justify that judgement. These are skills used in other subjects, many jobs and everyday life.

History is an excellent qualification to have for further learning and education.  It contributes towards the skills required for careers in law, journalism, and numerous corporate jobs. It also strengthens writing, communication and analytical skills essential for most jobs, it is a very popular qualification to have.

Students who choose to study History at Key Stage 5 follow the AQA History A level course.

The A level consists of 2 examined units, one based on Britain and the second with a more international focus which are studied concurrently throughout the two year course.

Additionally in the summer of Year 12 into the autumn of Year 13 students will complete a piece of coursework on South Africa 1887-1990. This unit will involve the study of South Africa with a focus on why the Apartheid system ended. Students will learn about the role of Nelson Mandela and analyse this alongside other factors (both internal and external) which contributed to the dramatic events of 1990.

Both of the examined units are each worth 40% of the final grade. The examinations are sat at the end of the course and are 2 hours 30 minutes long with one source question and two essay questions.

History is a very well established and respected A level which is held in high esteem by all universities including the most respected institutions, who all appreciate the challenge, range of skills and academic rigour which it requires from and develops in students. Similarly, employers have a strong respect for History as a qualification because they appreciate the demands of the subject and they are confident students will have acquired valuable transferable skills as well as knowledge and understanding of the past. These include: Understanding of history and development as it applies to nations and groups of people; efficiency in oral and written presentation skills; detailed research skills; proficient interview skills and techniques; proper and accurate record keeping skills; critical thinking skills; strong communications skills.

History is frequently a qualification which provides a route into careers such as law, journalism, management, personnel work, public relations, the Civil Service and many other fields.